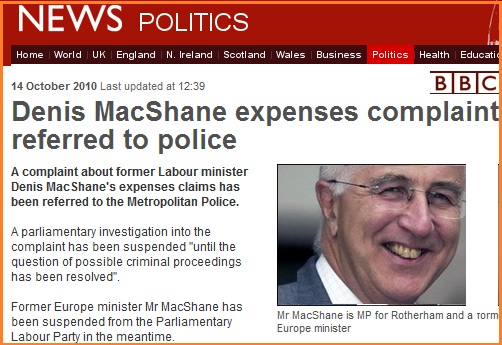 BBC News
What a busy morning for political news – the squeeze on high-earners pension contribution; the bonfire of the quangos, and now the news that high-profile former minister, Denis MacShane, has been suspended from the parliamentary Labour party after the Commons Standards and Privileges Committee, agreed MacShane’s conduct should be reported to the Metropolitan Police.

Denis, who I knew well at the BBC in the late 1970s, is by far the highest-profile MP to have been referred to the police and my guess is that he will get much more coverage than other cases.

MacShane’s immediate suspension from the PLP contrasts sharply with the appointment at the weekend of Phil Woolas as a shadow minister.

Woolas, the Oldham East and Saddleworth MP, gets the verdict in his case on November 5th.