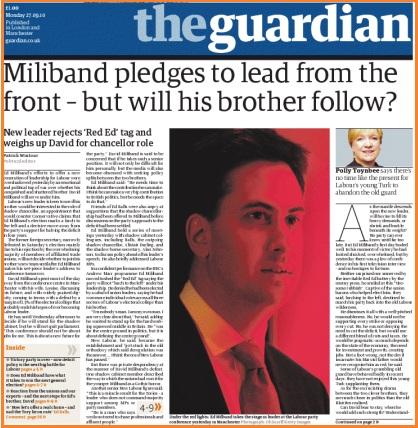 How difficult would it be for him to serve?

After the extraordinary victory for Ed Miliband on Saturday the focus is now on his elder brother, David, and the role, if any, he would have in the new shadow cabinet.

This is how the Guardian’s Patrick Wintour is reporting it:

“Ed Miliband’s efforts to offer a new generation of leadership for Labour were overshadowed today by an emotional and political tug of war over whether his vanquished and shattered brother David Miliband will serve under him.

Labour’s new leader is keen to see if his brother would be interested in the role of shadow chancellor, an appointment that would counter Conservative claims that Ed Miliband’s election marks a lurch to the left and a decisive move away from the party’s support for halving the deficit in four years…

..David Miliband is said to be concerned that if he takes such a senior position, it will not only be difficult for him personally, but the media will also become obsessed with seeking policy splits between the two brothers.”

I think that’s a reasonable view. The notion of a split between the brothers is a good story in media terms that could run and run and maybe David M’s best course is to step aside. The current situation must be extraordinarily difficult for him.

A big problem is that there’s hardly any time for him to think this through. Nominations for Labour’s shadow cabinet elections close on Wednesday – the day after Ed makes his first leader’s speech.