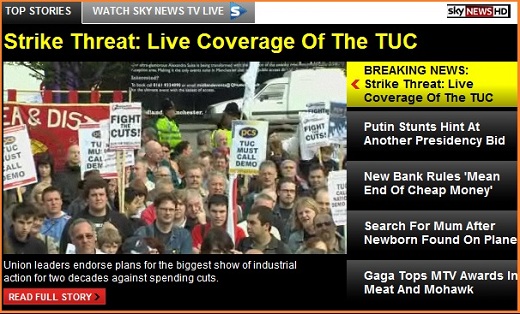 Could we see disruption on a massive scale?

By comparison with the 70s and 80s modern industrial action has had relatively little impact on the lives of the public – with the possible exception of London tube passengers and some people flying BA.

What’s made an impression on me in the past year is how difficult it’s been for some unions to make their action effective. BA managed to operate a significant proportion of its flights during the recent strikes and the post office industrial action seemed very patchy.

So how seriously should we take the noises coming out of the TUC? Are we heading for widespread disruption?

The hard part for the unions is that the legislative environment it totally different and the requirements for strike action have become quite tough – something that the Labour government did little to change.

On top of that the polling shows that at the moment the coalition has public opinion broadly on its side on the need for the cuts. Will that continue once serious measures start being implemented?

And should serious public service strikes take place who will voters blame – the unions or the government?

A lot of questions but no easy answers.