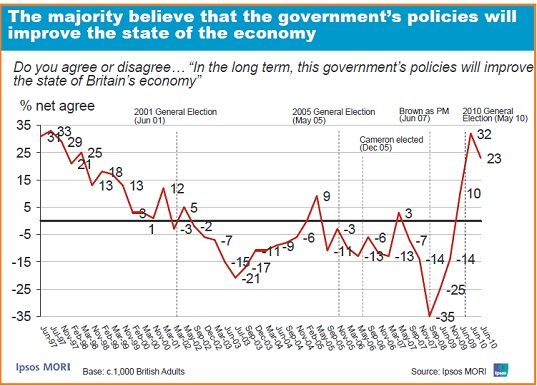 To mark the coalition’s first 100 days Ipsos-MORI has put together some current and historical polling data tracking the responses to some of the standard questions that it has been using for decades.

The above chart is the one that seems the most significant – a majority continue to believe that what the coalition is doing will improve the state of the economy. Just compare it with the previous government’s record after 2001.

Given the scale of cuts and other measures that the coalition is proposing it’s perhaps remarkable that so far at least the public seem to be on side.

In a sense Cameron/Osborne/Clegg have had it easy because during their first few months Labour has been leaderless and there’s been no concerted or coherent attack.

When Labour becomes a Miliband-led party on September 25th Dave or Ed has got to evolve a rhetoric that chimes with the public mood – and that might be at odds with the direction that the Labour movement would like to go.

How this is squared could be the biggest challenge facing the winner – for less than a fortnight after the election the serious detail on the cuts gets announced.

NOTE re the so-called poll from SkyNews

Anthony Wells of UKPR has put up a good attack of the Sky News “poll” that it is leading on. Essentially Anthony says its rubbish – a view I agree with.

It is downright misleading for Sky to present this as though it was a properly conducted poll.