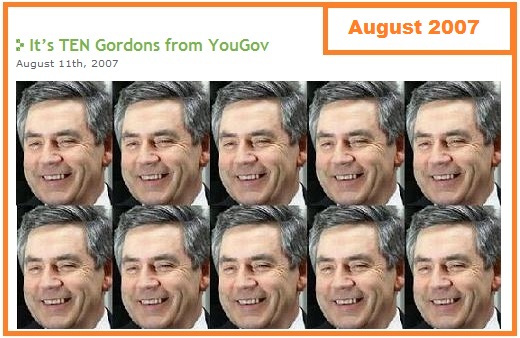 For a period back in 2007 the standard format for reporting polls on PB was to produce a series of smiling faces of the leader whose party was ahead – the number being determined by the size of the lead.

In the run up to Mr. Brown becoming PM on June 27th 2007 the number of “happy Daves” began to decline and not to soon after the change-over they were replaced by “Happy Gordons”.

This reached its first peak in a YouGov poll where the fieldwork closed on August 10th 2007. The shares were stunning and had a dramatic impact on the narrative. The Tories who had been enjoying comfortable leads were down at 32% – ten points behind Labour on 42% with the Lib Dems struggling on 14%.

It was this poll that set off the early election calls for on these numbers Brown could lead his party to another landslide totally eclipsing what Tony Blair had achieved in 2005.

Alas a Labour lead on this scale was not supported by any of the other polling that August and in just over a fortnight Populus had a one point Labour lead with ComRes putting the parties level-pegging.

Labour got back top double digit YouGov leads during the party conference at the end of September and were joined by MORI and, in one poll, by Populus.