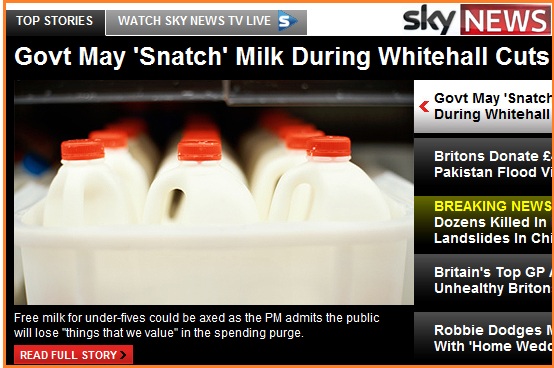 Get ready for the politics of the spending review

The main story on SkyNews this morning evokes memories of what became a defining measure by the then education secretary, Margaret Thatcher, in 1971 – a long time ago.

Even those who are too young to have been about at the time must be aware of the chant from the period – “Thatcher Thatcher – Milk Snatcher” – something that came to symbolise the 70s and the 80s. Her move then stopped school children of seven and above getting free milk at school.

So what are we to make of the news that what remains of that scheme, the free milk for under 5s in nurseries and day-care, might be axed? The cost, about Â£50m for England, doesn’t sound a lot but to achieve the scale of economies that the coalition is pursuing then each line item of expenditure has to be assessed.

But call me a cynic if you like – but isn’t this one of those measures that is being floated only to be withdrawn at the last minute. It could then be hailed as a victory for Nick Clegg and his team.

At the same time it will deflect attention from the full range of economies that are due to be announced in October.

No doubt Labour will aid this strategy by making a big fuss of the child milk scheme that was introduced in 1940 to help protect pregnant women and the young against wartime shortages.