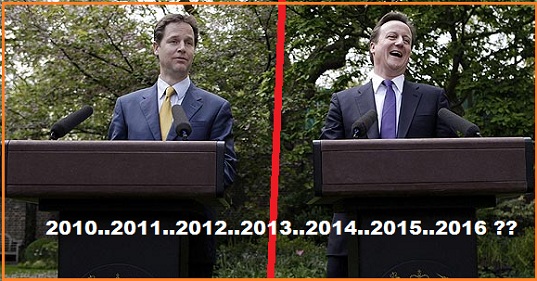 Is last night going to aid or hinder its survival?

It’s the big question in British politics – how long will the coalition last? No doubt we’ll all have our own views which might have evolved following the revelations that came out in last night’s programme on what happened in those five days after the election.

I am talking with one of the big spread betting firms about them establishing a “number of coalition weeks” market and have been asking around for views. Currently the consensus is that the opening point for betting should be about 130 weeks or into the period immediately after the conference season in the year after next. That would be end October/early November 2012.

My reading of the yellow position is that it will now take an enormous amount to prompt a splinter – even if the AV referendum does not produce a YES. They’ve gone down this route and the only real option is to stick with it for better or for worse.

What last night’s programme did not show is the extraordinary lengths that Clegg went to in order to ensure that there was a consensus and this will hold him in good stead however difficult it gets.

It’s the blues, I believe, where the pressure will come from and the circumstances in which the party agreed to the AV referendum commitment will continue to cause trouble.

For apart from Labour the big losers in the whole arrangement have been the Tory right. They’ve been marginalised and at some stage there might be an attempt to break Cameron and the deal.

One other thought from the programme was the role taken by Andrew Adonis. He’s a defector from the Lib Dems and seemed to be the big backer of the red view that the yellows should jolly well do as they are told. Maybe that reflects his own political journey?

What he did not grasp was that after being made a generous offer by the Tories then the LD team had high expectations from Labour. Mandy seemed much more realistic.

One thing’s for sure -this story will run.