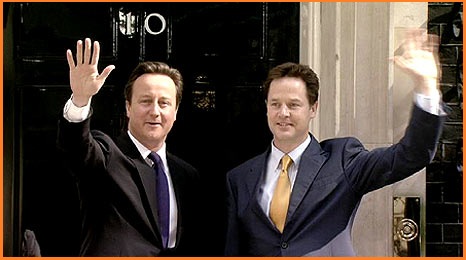 Was it his inaction that made the coalition possible?

Lots of things are popping up ahead of tonight’s big programme on the BBC telling the story of how the coalition came about.

The presenter, Nick Robinson, has a long piece in the Telegraph giving us a flavour of what to expect.

“..The Tory leadership was well prepared for a hung parliament. They had analysed the overlaps and the gaps between the Conservative and Lib Dem manifestos so that a day after the election they could table a series of documents focusing on 11 areas of policy, highlighting where agreement would prove hardest to achieve, and possible compromises. Although all claim that their minds were on the likelihood of a minority government, William Hague and George Osborne confirm that David Cameron spoke to them before polling day about a possible coalition.

In stark contrast, Gordon Brown had not prepared a policy offer, nor got the backing of his Cabinet, nor developed a relationship with Nick Clegg. This despite the fact that he must have known that a Lib/Lab deal was likely to be his best hope of political survival. When I put it to Peter Mandelson that Clegg found Brown impossible, the Prince of Darkness replied with a wry grin that “Noâ€¦ he’d found him Gordon-ish”.

Instead of building a relationship with the man with whom he might have to share power, Gordon Brown relied instead on his contacts with former Lib Dem leaders â€“ Charles Kennedy, Paddy Ashdown and Menzies Campbell â€“ and Vince Cable. Cable, who has known and liked Brown for three decades, was a regular pre-election visitor to Number 10. There were even hints of a ministerial job for him. Brown ignored the advice of Cable and all his Lib Dem friends to find a way to get on with Clegg….”

In the end it does come down to those personal releationships and maybe if Brown had planned then we would have a very different government today.

This programme could have a big political impact. I agree with the Speccie’s Peter Hosken when he writes: “.What happened during the coalition negotiations – who said what, why and when – could impinge on everything from the Labour leadership race to what the coalition members think about each other.”