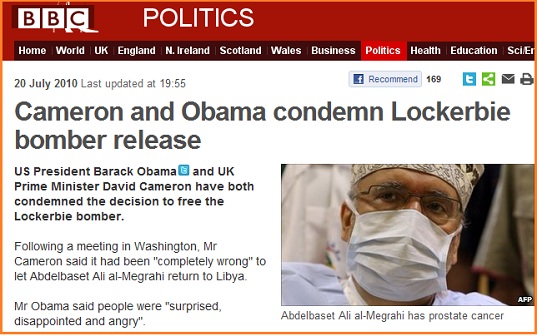 Almost certainly the key moment of this evening’s Obama/Cameron news conference were the comments on the decision by the Scottish government last year to free Abdelbaset Ali al-Megrahi and allow him to return to Libya.

The condemnation from both leaders was strong and forthright and the PM has promised a review of the case to provide further information. It was, of course, the Brown government that was in power when the controversial decision was made.

This has also got tied into the BP issue with suggestions that the company had pressed the government.

With the next major set of UK elections being the ones next May for the Scottish Parliament and the Welsh Assembly I just wonder what the impact of Cameron comments might be? Could they reinforce the nationalist position.