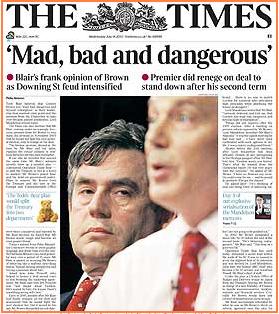 On a day when the big political news could have been the parliamentary battles and votes on the budget VAT increases it’s the Mandy book serialisation in the Times that’s likely, once again, to provide the big talking point.

Today in another extract devoid, it apears, of much detail, the focus is on the the Brown-Blair relationship and the tensions between the them.

This is how the Guardian reports it: “The relationship between Tony Blair and Gordon Brown became so hostile that Blair described his chancellor as “mad, bad, dangerous and beyond redemption” and likened Brown’s behaviour to that of a “mafioso” in his dealings with him, Lord Mandelson has revealed.

The breakdown in the two men’s relationship is detailed in the third instalment of Mandelson’s memoirs, The Third Man, in which he describes how he and other No 10 aides drew up plans â€“ codenamed Operation Teddy Bear â€“ to split the Treasury into two in an attempt to weaken Brown’s challenge to Blair after the prime minister agreed in 2003 not to fight the next general election, only to renege on his promise.

But plans to remove Brown from the Treasury and put him in the Foreign Office were twice considered and rejected by Blair because he feared Brown would resign and become an even greater threat….”

Unless the Times is holding something back there aren’t any new insights or even juicy details on what was the biggest political story for more than a decade. Maybe Mandy still feels constrained by loyalty to the two Prime Ministers that he served – but the account thus far adds almost nothing.

Will it have any political impact? I think it might just help David Miliband because it’s a reminder of the environment in which he was operating when people were urging him to take on Brown.

His cerebral style, assuming that he does get it, will surely be very different.

Apart from that it is all history – Mr. Blair and Mr. Brown have moved on.