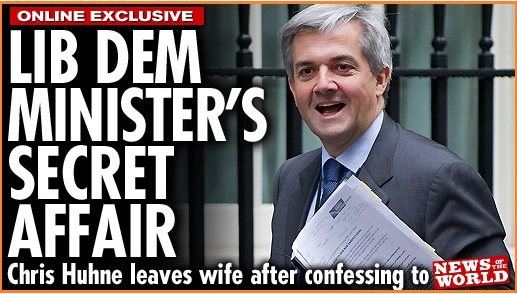 The News of the World story is here.

It seems that the original “scoop”, if that is what we still call these things, was by the People who possibly could feel a bit miffed that their arch-rival, the NOTW has now got its new angle on the story. Maybe their mistake was to start Tweeting about it too early?

Will it have a political impact? Probably not – Chris Huhne is not Lembit Opik although his “news” could keep the political media focused on something other than cuts.

Huhne is a former journalist and has probably been wise to react so quickly.