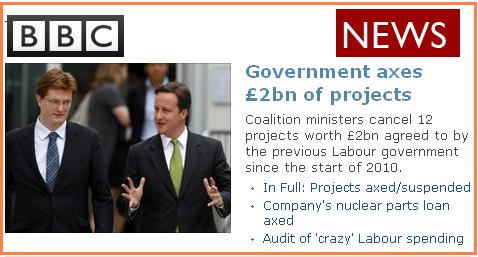 How much is falling in marginal constituencies?

The Treasury secretary, Danny Alexander, has this afternoon announced to MPs details of projects totalling Â£2bn that are being axed. On top of that there’s a list a projects which are being suspended.

All were agreed to by Labour between the start of 2010 and the general election.

Maybe this is just coincidence but what strikes me looking at the lists is how much seemed to be being spent in marginal constituencies. Sheffield is the base for a couple of the projects as are the West Midlands and Kent.

Thus Labour held on by just 165 votes in Sheffield Central where the city’s retail quarter was down to get Â£12m and Â£80m was going to Sheffield Forgemasters.

Many of what were marginals on May 6th could also be marginals at the next election. Will voters remember and could the coalition parties find it harder going as a result?

I’m sure that the thinking is to get the bad news over with quickly – will that work?