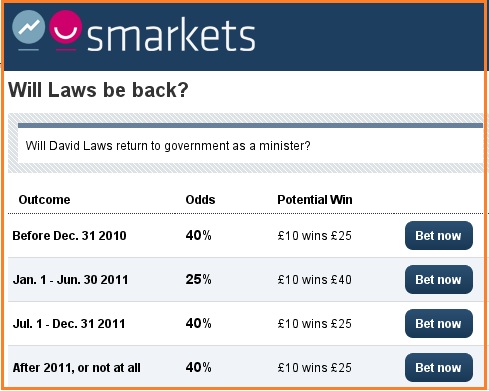 But how realistic is such a possibility?

There’s been some movement overnight in the betting on whether David Laws will return to government following a Guardian report that talks are taking place on Laws playing an informal role in the run-up to the coalition’s first budget in three weeks time.

Clearly the departure of the Treasury Secretary has had a massive impact and there’s an urgent need for the markets to be reassured during what could be a critical period and to deal with the criticisms of Danny Alexander’s suitability for the second most important treasury role.

But there are two massive questions – does Laws want even to stay in politics after what he has been through and what will the Parliamentary Standards Commissioner investigation produce?

On the former who knows while the latter would need to be fairly unequivocal on the ex-minister’s actions for Cameron to be able to bring him back.

My guess is that the Downing Street briefing to the Guardian was more about calming the markets and taking the sting out of the attacks on Danny Alexander than about Laws’s future career.