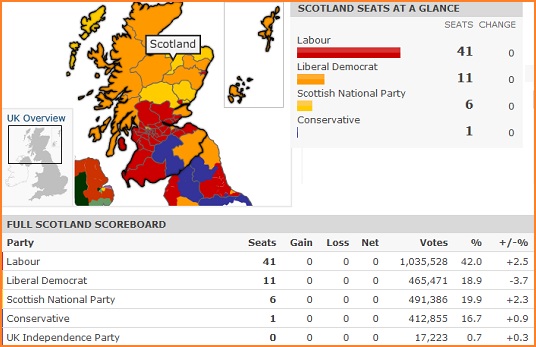 What future for blues north of the border?

In 2005, across the United Kingdom, the Conservatives won less than 200 seats; in 2010, they won more than 300. That increase of more than a hundred came entirely in England and Wales; the Scottish Conservatives returned just the one constituency, the same as in 2005.

This poses David Cameron and his party several problems. The one of mandate is relatively easily answered, although none of the answers are perfect from his point of view. Devolution means that the majority of state provision is delivered by a government that has a â€˜Scottish mandateâ€™ (although ironically, the SNP minority government won a smaller share and fewer votes in 2007 than the combined Conservative / Lib Dem totals two weeks ago).

The Lib Demsâ€™ Scottish MPâ€™s also come in handy in boosting the number in the coalitionâ€™s two parties from north of the border to twelve – not a majority by any means but not insignificant either.

A bigger problem is how to start regaining even some of the ground lost in the long decline from the fifties through to the nineties. Since 1997, the Conservatives have at best flatlined in the 15-18% range.

Itâ€™s been argued that part of the reason for that is cultural; a lingering resentment from the days of Margaret Thatcher, the Poll Tax, deindustrialisation and so on. Perhaps for some it is but the Conservatives actually did reasonably well under Thatcher: the problem became much worse after 1992. In any case, I donâ€™t believe the issues were any more intensely fought over in Scotland than parts of Wales or northern England and the Conservatives have recovered there.

A greater problem is structural. First-past-the-post tends to two-party politics. In most of England and Wales, the Conservatives are one of the two parties; in Scotland, thatâ€™s not the case outside of the south, parts of Edinburgh and a few other pockets. A desire to kick Labour (as in 2007 or 2009, though not 2010), doesnâ€™t then imply a vote for the Conservatives: other parties are now getting the votes that once went blue.

At one time, the Scottish Conservatives were largely independent of the rest of the country and stood as Unionist. Itâ€™s been suggested – not least by some on here – that the name should be revived and a more obvious distinction created to avoid accusations of London-centric attitudes. Thereâ€™s some sense in that but itâ€™s a reactive strategy, tacitly accepting the criticism. Thereâ€™s also an inherent contradiction in the presentation if not the logic, in promoting the union while running separate parties north and south of the border.

Making such a change may however play into at least one other partyâ€™s agenda. The SNP are keen to lump the other parties together as â€˜unionistâ€™. For the Conservatives to adopt the name would create an ambiguity between â€˜unionistâ€™ and â€˜Unionistâ€™ that the SNP might exploit with a public sceptical of the Conservatives – and of course it would serve to continually highlight the SNPâ€™s principal policy, if by reflection.

That said, Iâ€™ve often thought that â€˜Conservativeâ€™ wasnâ€™t a very good name for a political party. Itâ€™s too long for one thing and frankly, a bit dull (though appearing dull can be good if you want to do radical things). If only there was another, shorter name that could be employed; one already associated with the party and its heritage; one that in the noble tradition of British politics, took an insult and wore it as a badge of honour and so defused that insult in the process.

Funnily enough, such a re-branding might be a part of solving the Conservativesâ€™ Scottish problem. There is still a detoxification process to be gone through but it canâ€™t be one that constantly involves apologising and a sackcloth-and-ashes approach: the public has to be inspired too. Nor should such a detoxification play to any other partiesâ€™ strengths. Still, itâ€™s something to think about.