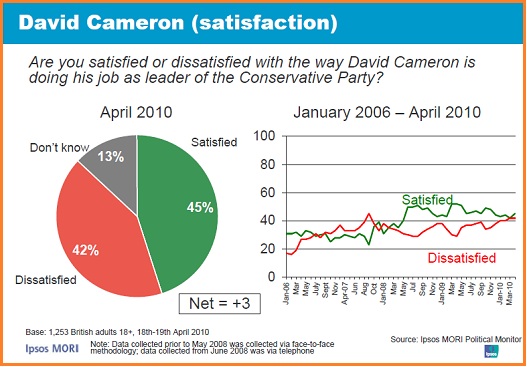 Is 4.5 years as opposition leader just too long?

One of the key sets of figures that overseas pundits always look for are the approval ratings and, indeed, the most linked to PB post from the US this week has been that on the huge rise in Clegg’s rating.

Clearly there’s a stark contrast between the Clegg and Cameron position and doubt the Tory leader will have learned lessons from the first debate and step up his game tonight – but I wonder whether there is a bigger issue.

Look at the chart above from MORI and see how the dis-satisfaction levels have increased and how on a measure on which he used to command a big lead his position has got a worse.

He’s been opposition leader for four and a half years and I wonder if the public have just become a bit tired of him.

It’s must so difficult keeping up the pressure and seeking to command attention for an opposition because so much of the news agenda is controlled by the government.

Debate betting from the new political betting exchange Smarkets or from Ladbrokes.

He can still win a majority, of course, but a lot depends on tonight.