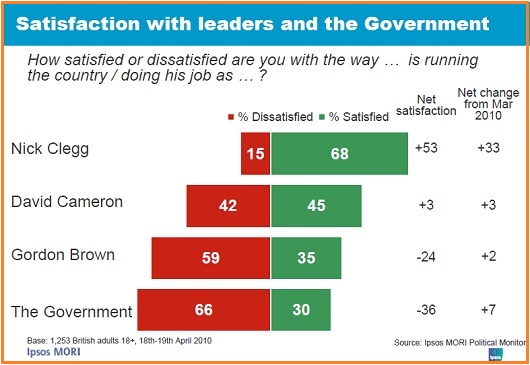 Is this the trend we should be looking at?

PB regulars will be aware that one of the sets of monthly data that I take seriously is the above from MORI – the leader approval ratings.

These have been asked in precisely the same form since the late 1970s and have proved to be an equal if not better guide to general election outcomes than the standard voting intention findings.

Given that the latest MORI poll was carried out as Cleggmania was taking hold then the massive change in the LD leader’s numbers won’t come as a surprise.

Nick Clegg, who took over the most popular party leader slot from Cameron a year ago, has seen his net satisfaction (the percentage satisfied minus the percentage dissatisfied) increase to +53 from +20 in March.

Clegg is now more popular amongst the public as a whole than Gordon Brown is amongst Labour supporters.

These numbers really spell out the challenge facing both Labour and the Tories as the campaign moves into its final fortnight.

Ladbrokes now make Clegg the 10/1 second favourite to be next PM.