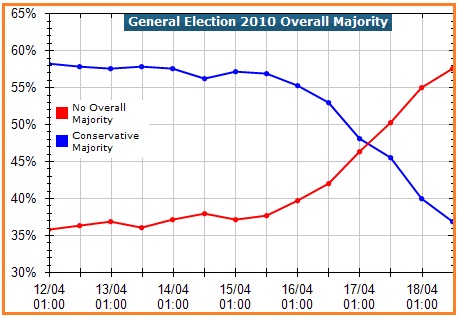 What will the next seventeen days bring?

Our chart shows the dramatic movement in best betting prices on a Tory majority over the past extraordinary week – a period when the views of the election outcome from punters and pundits alike changed so dramatically.

As someone suggested on an overnight thread – the Lib Dems have gone viral and we’ve no idea where this will end. Certainly the prospects for the Tory majority look a lot thinner this morning.

For what seems to be happening is that Labour supporters see that switching to the Lib Dems might be a way of stopping what they had come to regard as inevitable – a Cameron majority government.

So many questions remain. If opinion can change so much in such a short period can we expect more volatility with, perhaps, the Liberal Democrats returning to their usual place in the hierarchy – in third place behind Labour and the Tories?

So what should punters do? How do you capitalise on what appears to be a new situation?

I’ve bet heavily in the past 24 hours and have looked for longer prices in seats that might now just come up for the Lib Dems. My focus has been on three-way marginals where the yellows were in third place in 2005. Thus I got 6/1 against the party winning Filton and Bradley Stoke – last time they were just seven points behind.

Another bet, at 4/1, was against the Lib Dems in Northamption North – a seat which Nick Clegg visited last week, a sure sign that the party thinks it is in with a shout.

I’ve also bought the Lib Dems at the 76 seat level on the spreads and had a couple of speculative wagers on the most seats and overall majority markets on Betfair. If ICM, expected tonight, is in the same broad area as YouGov, then those prices should shorten.