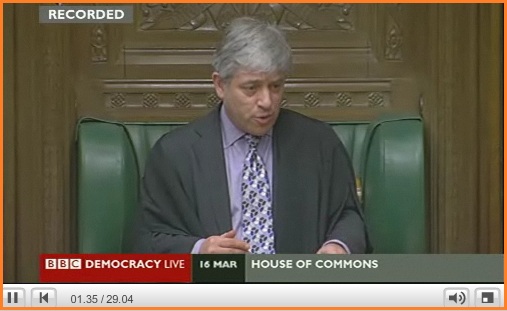 Is a post-election challenge now likely?

One story that really has not been given the coverage it perhaps should was this moment in the commons on Tuesday afternoon when Speaker Bercow sought to prevent Tory front-bencher, Theresa Villiers, from raising Labour’s links with UNITE during a question on the BA strike.

“….. he was inundated with backbench complaints about the Speaker’s conduct, many of which were aired at the 1922 executive on Wednesday night.

Crucially, ’22 chairman Sir Michael Spicer used the Cameron lunch to express his own disquiet. A source tells me that Sir Michael warned Cameron that he should not seek to force frontbenchers to back Bercow after the election – when the plotters will object to the re-election of the Speaker.

In theory any vote on the Speaker’s re-election would be a free vote. But in practice the whips would play a key role. If they decided to sit on their hands, or even encourage a decapitation, then Mr Bercow could be toast. One MP tells me that the Opposition whips now share backbench irritation over the Speaker that they too are in no mood to save him.”

Those 9/2 bets from last June on Bercow’s prospects as speaker start to look quite good.