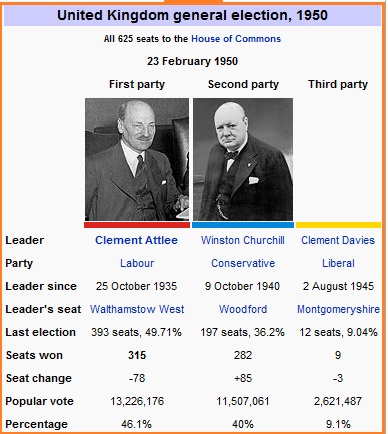 Could 1950 be a good precedent for Labour?

As we count down to the 2010 election I’ve been trawling through the numbers from elections long past to see if there are any lessons for today.

And the one that Labour might take heart from is 1950 when Clem Attlee’s then party had had a bad period in the polls with deficits of up to six points in the year beforehand. This was turned round in the final months so that on election day the overall vote split was LAB 46.1% to the CON-National Liberal aggregate of 43.4%.

Labour lost 78 seats while the CON/NL grouping picked up 90. This left Labour with an overall majority of just four seats which in the end proved to be not enough. There was an election the following year and Winston Churchill’s Tories came to power.

What’s significant here is that the polling deficit of the period leading up the election in February 1950 was turned round.