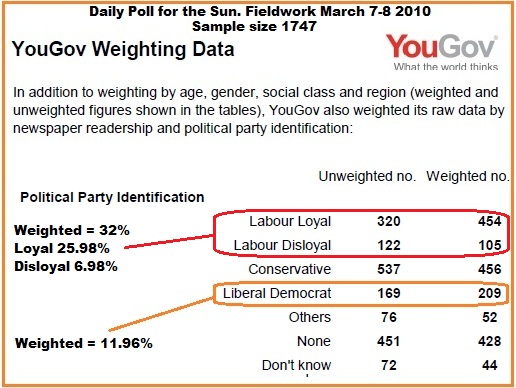 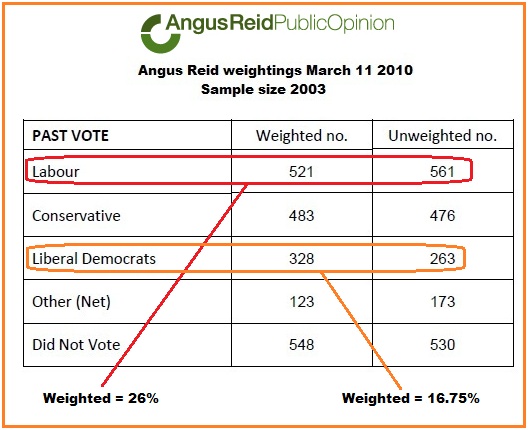 When you get two polls, apparently so far apart as YouGov and Angus Reid, it’s very hard to come up with an explanation except by digging deep into the the data.

Fortunately we got all the Angus Reid data from the latest poll within hours of its publication. The weighting data is here while the details cross-tabs are here.

The YouGov information should be available this morning but for comparison purposes I’ve used the weighting statement form a couple of days ago. The proportions will not have changed.

The main difference between the firms is that the former weights by political party identification while the latter simply links back everything to that which respondents said they did at the 2005 election.

It is “Labour disloyal” and the corresponding down-scaling of the proportion of Lib Dems in the YouGov structure which is at the heart. Thus while 16.75% of the weighted AR sample is made up of 2005 Lib Dem voters YouGov has only 11.96% allocated to those identifying themselves as Lib Dems.

Notice how the AR sample includes a much bigger allocation weighted to “others” which might partly explain the higher shares it reports for this segment.

So who has got this right? They are probably both wrong and that YouGov is overstating Labour position while AR is understating it. That certainly is what the other polls, particularly ICM, seem to be telling us. All will become, clear, surely by mid-afternoon on May 7th.