A new measure by researchers at the University of Manchester shows a significant problem for Gordon Brown: the mood of the country is against Labour on policy competence. It is as serious for Gordon Brown as it was for the Conservatives before Labourâ€™s landslide victory in 1997. The current decline against Labour is precipitous.

Green and Jennings argue that it is important to study the public mood across a large number of issues: public ratings of party policy competences move together.

This graph shows the authorsâ€™ measure, â€œmacro-competenceâ€ over six incumbent governments, annually, from 1950 to 2010 (the final data point is February 2010 â€“ the most recently available). 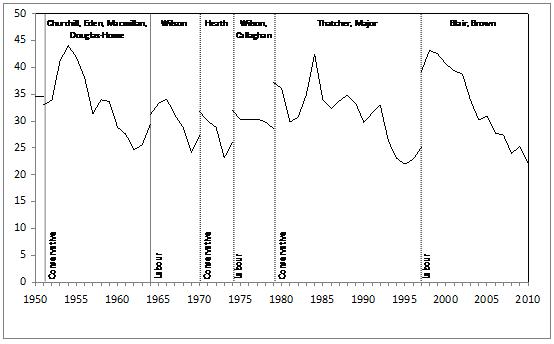 The measure is constructed using a comprehensive dataset of policy questions about trust, competence, and handling, obtained from recorded opinion polls and surveys since the 1950s. Around 2,500 administrations of question were used by Green and Jennings to compile the measure. The data are analyzed extracting the common variance using an algorithm developed by Professor Jim Stimson (University of North Carolina, Chapel Hill). This provides an indication of the mood in the country about which party is most competent on policy issues.

The following graphs show macro-competence, annually, for Labour and the Conservative party. 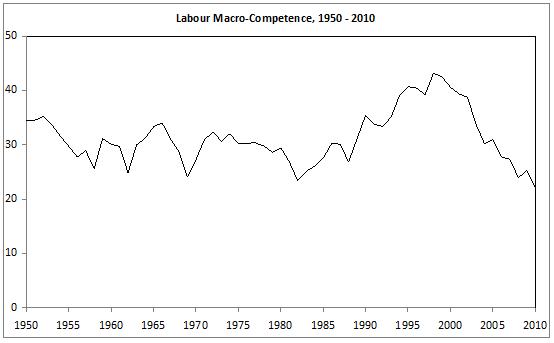 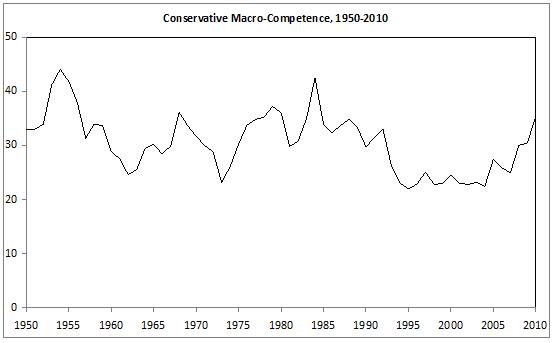 These data point to an important advantage for the Conservatives, although the increase is not of the same order as the decrease for Labour. This may explain why the Conservative party is not doing better against an unpopular Labour government and Prime Minister. The measure is highly correlated with vote choice, leader approval, and many other indicators. For most governments a small up-tick precedes an election. It is yet to be seen whether this will be true for Labour this coming May.

Further information is available from the authors.

Mike Smithson’s polling column for the News Statesman is here