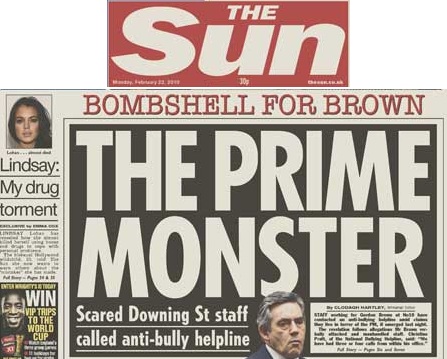 Is this a narrative-turning story?

For Mr Cameron of Notting Hill it’s been a pretty bleak start to 2010. Nothing seems to have gone right as the Tories seemed to have moved from one gaffe to another. Fairly or unfairly the media narrative was about the party and his leadership and doubts had just started to seep in over the election outcome.

But how things have changed in the past 24 hours. The publication of Andrew Rawnsley’s book was always going to a tricky hurdle and until about 5.30pm last night it seemed that the ruthlessly efficient Labour and Number 10 teams were containing the story.

But then came the Christine Pratt interviews giving the Rawnsley allegations real credence making them much harder to dismiss.

As you would expect the papers don’t look good and the one I’ve selected is from the Sun. The “Prime Monster” front page could become a classic.

You can bet that just about every radio phone-in up and down the land this morning is dominated by just this one subject – for bullying, particularly in the work place, is something of which so many have personal experience.

So where does it go from here? How will it be raised at PMQs on Wednesday? Could it even provide one last peg for the anti-Brown factions within the Labour movement to make a move?

Who knows – but my betting position on Brown not leading his party at the election might just be a winner after all. Ladbrokes have 8/1 on Brown going before the general election.