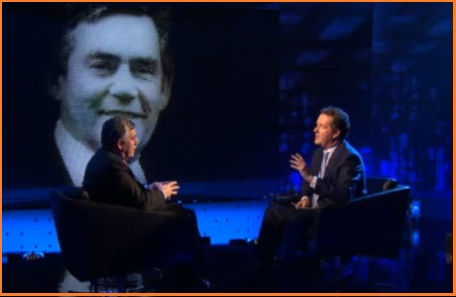 What’ll be the impact of the Brown/Morgan programme?

At this stage before the general election the only thing that matters is whether Brown’s much-hyped TV programme with Piers Morgan is going to cause any more people to vote Labour in the seats where it matters.

It’s certainly blanked out the rest of the political news agenda including yesterday’s explosive row between Andy Burnham and Andrew Lansley which Labour might have gained from.

On the thread overnight comments were broadly favourable. This is a selection:-

“…Revealing. A narcissist who has no insight into the minds of others…”

“A good packaging job. Gordon as relaxed and presentable as Iâ€™ve ever seen him on TV. The audience response, which appeared â€˜cannedâ€™ to begin with, did become spontaneous and sympathetic as the interview progressed. Yes, it is cheesy and scripted, but so are most â€˜celebrityâ€™ interviews. It is promotional not political. A good example of its type…So yes, it has â€˜humanisedâ€™ Brown. And it will have a positive impact on his personal ratings. It is not however a game winner..”

“..Problem with Brown is, its all an act, a few days later, heâ€™ll snap again, chuck a few secretaries around and nokias, scowl, whatever and this whole sad interview will look 10xâ€™s as fake as it does now..”

“..The key to these sort of shows for a politician must be first: do no harm. I think Brown hasnâ€™t hurt himself at all by opening up, even if it is a little tacky. It does reveal how desperate Labour are though, I donâ€™t remember Mrs Thatcher once playing on the fact she was a woman, or can you imagine President Roosevelt talking about his polio in similar terms?”But Gordon Brown is a human being and I always hate it when posters joke about his sight, or compare Blair to a Nazi. Labour leaders should be treated as opponents not enemies..”

“..I am not a Brown or even labour supporter but I donâ€™t think he is fake. Blair was fake. Cameron can be fake. I think Brown is not fake but is terrible at the PR game which accounts for his bloopers such as Youtube. Problem is we donâ€™t like dour but in trying too hard to shed this image, he comes across as awkward but I read him as a reasonably honest guy caught up in a game which requires the sort of panache that Cameron has…”

“..Well my guess is that this interview will improve Gordonâ€™s ratings, temporarily. No own goals…But it was an appallingly soft interview from Piers Morgan. Disgraceful that this is presented as journalism when they are clearly â€œchumsâ€ ..”

My view was that Brown came out of it well and a bit more human. But I can’t see many people changing their minds about him.