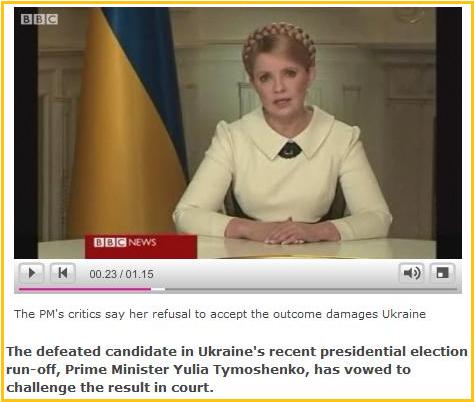 Almost a million behind, Tymoshenko will contest results in court

Five years on from the Orange Revolution of December 2004, the 2010 presidential election in Ukraine has lacked the drama of its predecessor, but in many ways that is a welcome sign of a country slowly moving towards a proper democracy, even if, as the events of the last week show, there is still plenty of ground to cover yet.

The results were nothing short of a humiliation for outgoing president Yushchenko, who received a mere 5Â½% of the vote and fifth place in the first round (the worst score by a president seeking re-election anywhere ever), but did his best to act as spoiler in the second, urging his diminished band of supporters not to vote for erstwhile Orange comrade Tymoshenko. His result was a sorry end for the fervour of 2004, after all the infighting and bickering in Ukrainian politics, although one positive legacy of five years ago is that the 2010 election (Tymoshenkoâ€™s protests notwithstanding) does seem to have been a much cleaner affair than 2004.

Yanukovych, the villain of the piece in 2004, finished almost 900,000 votes ahead of Tymoshenko, but with â€œAgainst Allâ€ and invalid ballots accounting for over 5% of the vote, has received the weakest mandate of any Ukranian president since elections began in 1991, with a shade under 49%. The electoral map is as divided as in 2004 (no oblasts are really marginal, with several scores above 80%), although Yanukovych did manage to win some lower-level districts in the west of the country.

After staying silent for most of the week (the vote count not complete until Wednesday), Tymoshenko (still the sitting PM) has declared yesterday that she will contest the election results in court, saying “I want to clearly state: Yanukovych is not our president. Whatever happens in future, he will never become the legitimately elected president of Ukraine” According to her, more than a million votes have been falsified or miscounted, the Yanukovych stronghold of the Crimea being singled out for â€œshockingâ€ irregularities.

However, 2010 has major differences from 2004. Crucially, international observers have hailed the conduct of the election – the OSCE declaring them “professional, transparent and honest” (although Tymoshenko has claimed that some OSCE monitors will support her claims with video evidence). Also, perhaps recognising that her complaint is really just going through the motions in an attempt to weaken Yanukovychâ€™s legitimacy and prepare the ground for a presidential run in 2015, Tymoshenko has urged her supporters not to take to the streets, which might destabilize the country.

Like losing candidate Geoanaâ€™s unsuccessful complaint against the results of the much closer presidential election in Romania in December, Tymoshenko is similarly unlikely to get the result overturned, despite her bravado. Yanukovych has today been confirmed as the new president by the Election Commission, and once in office is expected to take a more pro-Russian line than the outgoing Yushchenko (maybe letting Russia keep its fleet stationed in the Crimea for longer), while at the same time trying not to antagonise Europe. One of the first tasks will be to try to assemble a new stable government that excludes current Prime Minister Tymoshenko, which may mean early parliamentary elections and more potential instability.

It remains to be seen if Tymoshenkoâ€™s legal actions will amount to anything, but it now looks as though sheâ€™ll end up having to accept the inevitable. For the good of Ukraine and its political fabric, she ought to have conceded defeat gracefully, as the boot may be on the other foot in 2015 – and having tried and failed to rig one election, Yanukovych is set to finally be inuagurated as president after a second one that by Ukraine standards at least, was fairly clean in the eyes of the world. But how long will it be before the countryâ€™s political uncertainty eases, so that it can tackle its major economic problems?

The Election Game, covering over 30 countries, is now on the web at www.electiongame.co.uk