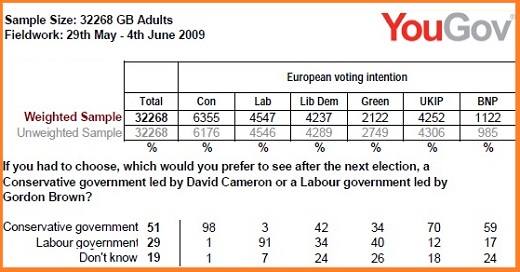 How will it split as the share for “others” gets smaller?

Following Tuesday’s thread on the decline in poll shares for the other parties a key question is who will benefit the most?

For working out where these votes will go could be the key element in predicting what is going to happen on the day and whether Labour will be able to stop Cameron’s Tories from forming a majority government.

A problem is that there’s so little polling data available. Most firms now break-down their non-voting findings by main party allegiances but in standard sized polls the small party totals are not big enough to produce meaningful figures.

But there is one resource available from last summer that we have looked at before – the YouGov mega-poll with a 32,268 sample that was carried out just before June 4th EU elections. Here the firrm was able to segment GRN/BNP/UKIP voters and provide breakdowns on the other questions that were put.

The findings I’ve reproduced above are the responses to the pollster’s standard forced choice question – when faced with just two option would respondents prefer a Cameron-Conservative government or a Brown-Labour one?

Now these are not voting intentions and we have no idea whether the findings can be seen as an indication of what respondents would do. But as often happens this is all the data that we have.

A key element here, of course, is that many GRN/BNP/UKIP supporters simply won’t have the chance of backing their favourite party. None of these three parties is going to be able to contest every seat.

Even with the caveats set out above it is hard looking at the numbers to conclude other than that the Tories have most to gain.

I have yet to make a call on the overall election outcome – but I’m getting closer to believing that Cameron will get a majority if only because the data shows that there are fewer negatives than Brown.