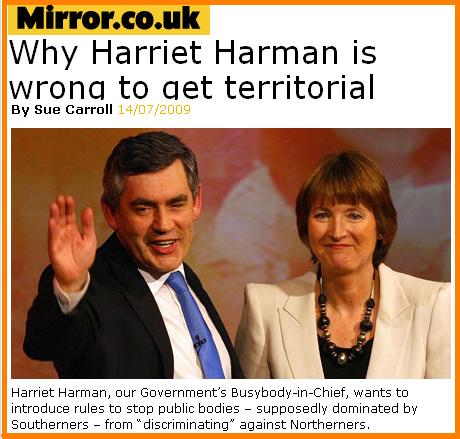 Is Harriet Harman back on manouevres?

My initial response was that it must be an April Fool delivered late by her Press Office, but in the light of a new day it appears that tackling ‘anti-Northern discrimination’ was a genuine policy announcement from the Press Office of Harriet Harman MP QC.

Harman has, of course, long been the self-appointed poster child of the equality movement – promoting the equalisation of women, ethnic minorities and LGBTs in British society. I suspect this has made her more enemies that friends, but her solid bedrock of support within the Labour Party has elevated her to Deputy Leader. She has owned the equalities agenda, although is currently involved in a reported feud with Trevor Phillips, the Chair of the Equality & Human Rights Commission, with Harman and her deputy Maria Eagle apparently trying to oust Phillips in favour of Bob Niven.

So what exactly was this latest reported move supposed to achieve? There are parts of England that might feel aggrieved at having been excluded here: Cornwall has an unemployment crisis, but would not get any favouritism from this suggestion. And even those included might object – I cannot imagine the Ridings of Yorkshire whose BNP voters object so strongly to positive discrimination ‘at the expense of the white working class’ suddenly embracing Harmanesque playing-field-equalling that might benefit them. Was this really a hamfisted attempt to reconnect Labour to its Northern working class heartlands?

What is most staggering to me, however, is how badly this would play in the South of England – a fact which would not be lost on the endangered species of southern Labour MPs who will already be fearing for their jobs. For workers in Dagenham or Slough or Reading to be told that they are over-privileged in the job-market seems almost suicidal to me. But then maybe the fact that most southern Labour constituencies are a lost-cause electorally was part of the reasoning.

Unless there are turfwar ramifications relating to the conflict with the EHRC or this was just cringeworthy ‘relate to white working class voters to get them back from the BNP’, I can only assume that this was motivated in part by a need to nurture votes for the post-Brown leadership election. Harman has some Union support, but only narrowly beat Johnson to the Deputy Leadership and he has been elevated more noticeably under Brown than Harman. She will need the support of members of the Parliamentary Labour Party in droves if she is to win. Outside of London, it is not inconceivable that Labour might have only one or two MPs south of Birmingham – there are no entirely safe Labour seats in the South Eastern, South Western or Eastern regions of England.

If the Parliamentary Labour Party, especially if about half the size of its present incarnation, is still to be a third of the Electoral College for Leader, then its support will be crucial in the post-GE election. With severe challenges in both Scotland and Wales, a higher proportion of Labour’s MPs than ever before are likely to come from the Midlands and the North of England. As a Southern, middle-class woman representing a London seat, Harman must recognise that she is demographically perhaps not as well-placed to appeal to Northern male MPs (many of the Blair Babes took Southern seats) as she needs to be.

Harriet Harman has done well to keep her nose clean throughout the expenses scandal, and although Alan Johnson has overtaken her as the assumed choice of leader if Brown goes before the election, this will not be for lack of behind-the-scenes work. I don’t know who co-ordinated the attack on the PM this week for ‘laddishness in Number 10‘ but reported comments by Caroline Flint, Baroness Jay, Jane Kennedy and Patricia Hewitt on the same day suggests that someone was introducing the suggestion that a change in culture might be advisable.

With David Milliband’s chances of becoming Labour leader completely dead in the water, Harriet Harman must realise that this is her one chance. I think she’s noticed, and I don’t think this daft idea (as though it was ever meant to be implemented) will be the last shot across the bows we will see from her.