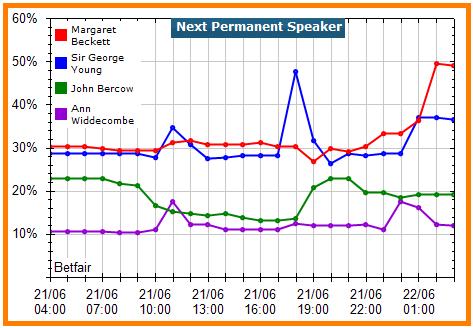 But could a late entrant act as a spoiler?

The chart shows the changing prices for Next Speaker in the 24 hours from 4am yesterday to 4am today. The betting prices are shown as an implied probability.

As can be seen there were quite a lot of changes in sentiment in this final day before this afternoon’s elections but as at the time of writing (4.30am) the punter view was that Margaret Beckett is going to win the ballot.

But, of course, it’s not punters who decide for the election is restricted solely to the 644 current members of the house of commons and for the first time the voting for a speaker will take place by secret ballot.

The big question is whether this will take away the power of the whips, particularly Labour ones, to influence the outcome? Certainly there’ve been signs of a heavy operation in support of Beckett who was a minister until only a couple of weeks ago

One joker in the pack is that entrants don’t have to declare themselves until 10.30 am this morning – so it is possible that somebody entirely new could enter the field. It’s also possible that one or two of those named as contenders might withdraw at the last minute or might not be able to get enough nominations. A full list of runners will be published just after 11am.

Voting will be a series of secret ballots. Assuming nobody gets 50% of the vote in the each round then new ballot paper will be prepared without the names of the candidate who came bottom and any candidate who received less than 5% of the votes. It’s also expected that others might withdraw at this stage.

This should be a great political betting day – good luck.