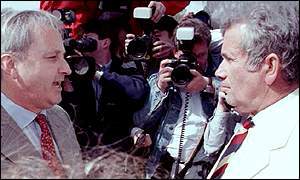 Is Tony Blair in danger of going the way of Neil Hamilton?

With all the focus on the White House Race we have yet to catch up with with the plan by Martin Bell or another prominent TV journalist to run against Tony Blair in his Sedgefield constituency. The idea would be to repeat what Bell did in Tatton in 1997 where the Lib Dems and Labour pulled out to give him a clear run against Neil Hamilton.

If the plan does go-ahead then the 3/1 bet available on Tony Blair’s tenure at Number 10 ending before the end of next year being even more attractive. This just adds to the number of possibilities that could cause the Prime Minister to make an early departure – his health, the General Election Result, a leadership move by Gordon Brown etc.

With the Lib Dems hard on the heels of Michael Howard in Folkestone could it be that the leaders of both main parties are in danger of losing their seats?

This must be just fanciful, surely, but it could make for interesting General Election if the two men had to focus more of their time in their own constituencies rather than the national campaign.

There was some reassuring news for Howard at the start of the Tory Conference when the Mirror reported on an ICM poll in the seat which had Howard up 3% on last time – putting him at 48%. For some reason this was not given much prominence!