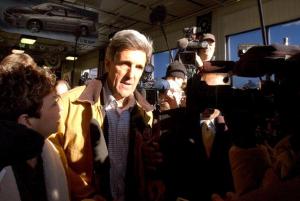 Punters should hold their nerve on John Kerry

After the euphoria of the Boston Convention John Kerry has been moving in and out of favourite position in the UK as the polls have reported differing messages on the impact of his formal nomination last week. We stick by our CALL on Kerry, first made nearly three months ago and repeated nearly twenty times since but we think that it’s going to be a tough August for the Democrat contender.

Betting Markets. Once the Boston effect has worn off and the Republicans have had their Convention we excpect the Kerry price to weaken which is what is happening in the US. It might be worth holding off for a weeks to see what happens. The US-foused Tradesports has Bush firm favourite as has the Betfair betting exchange. The Iowa Electronic Exchange, where political futures are traded like stock and shares has seen a significant move back to Bush. This is their plotting chart. UK price movements have tended to track the US but are about two weeks behind.

Campaign Spending. A big factor that could affect the betting is a quirk in the rules on the maximum limit a candidate can spend. This starts from the official nomination so the Kerry-Edwards taxi-meter began running last Friday. But the Bush-Cheney campaign will not be subject to the constraints until after the Republican Convention in New York at the end of the month. Expect a huge blast of spending on TV ads attacking Kerry in the next few weeks which his campaign will not be able to match. This will depress Kerry’s poll ratings and, no doubt, the betting prices.

The Polls. The expected Boston Bounce in the polls happened but not to quite the same extent that some predicted. Most of the surveys since the Convention have Kerry ahead but one or two don’t. One interesting feature is a huge gender gap. The Newsweek poll has Kerry 53-37 amongst women but behind at 43-48 with men.

Our view. We made our call on Kerry because we believed that the desire of Bush’s opponents to get him out exceeded those of the President supporters that he should get four more years. Boston has reinforced that view and this will show on November 2.

Although we recognise Kerry’s failings as a candidate we think that he’s much more able than Al Gore was four years ago to beat the Bush machine. It’s going to be tough; its going to be close and it’s going to be very dirty. Stick with Kerry.

Politicalbetting.com – One of the BBC’s top political web-sites

A big thank you to those who nominated Politcalbetting.com as one of the BBC’s top political web-sites. The nomination has led to a doubling of site usage from our previous peak at the time of last month’s by-elections. This is what BBC Online said:-

Politicalbetting.com scored highly with News Online readers. Essentially an online tipping service for anyone who likes an election-time flutter, the site is crammed with analysis and commentary and was praised for providing a “different angle” on the UK political scene.

Thank you for all your support and feed-back. The site is going from strength to strength and if users are not making much money yet I hope, at least, that they are finding it interesting!