Five weeks ago we advised that backing Charles Kennedy’s Lib Dems for 58 seats or more on the spread markets was a good value bet. Those who took the advice could now get out at a profit of four times their unit stake. But don’t – even with the buy price rising last night to 66 we believe that this is still value for money.

Now another big opportunity has emerged on the spread markets – SELLING LABOUR. In spite of the drubbing the party got in last week’s by-elections the spread price on Labour has surged to such a point where there’s now real value in selling at 346 seats.

With this type of bet you win your unit stake multiplied by the number of seats that Labour is short of 346. So if they got 316 and you had £10 a unit on your winnings would be £300. On the other hand if Labour got 366 you would lose twenty times your unit stake.

The latest prices for Labour on the spread-betting markets are over-valued and offer a good opportunity for punters wanting to bet against them. These are last night’s figures with comparisons from last week before the by-elections:-

What’s not taken into account is the reduced sized House of Commons and the spreads seem to assume that the rise of the Lib Dems – up to 25% in this week’s ICM poll – will have almost no impact. The theory is that the party will just build up votes that it cannot convert into MPs. We disagree and our view of the outcome is based on the following factors:-

Applying these factors to Martin Baxter’s current “poll of polls” we get the following House of Commons:-

Thus our projection has Labour at 51 seats less than the current spread sell price. We think that this is a good value bet.

In the Commons the party Labour would be 28 seats short of an overall majority. The combined Lib Dem and Tory total of MPs would not be enough for a majority. Michael Howard’s Tories would, just, be the biggest party in England.

2 pm UPDATE – A by-election in the town that elected H’Angus the Monkey as mayor? 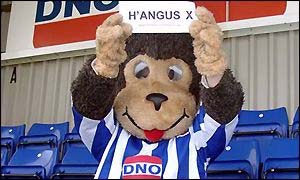 If Peter Mandelson is appointed an EU Commissioner this morning then there will be a by-election at his seat in Hartlepool. At the 2001 election this was the result:-

Hartlepool voters were last in the news two years ago when they rejected Labour and elected local football team mascot, Stuart Drummond, known as H’Angus the Monkey, to the post of Mayor after securing 60% of the vote.

NEW MARKET – MANDY TO BE A NON-STAYER FOR THE THIRD TIME?
Meanwhile, following his nomination by Tony Blair, bookmakers William Hill are offering odds of 3/1 that Peter Mandelson fails to see out his full term as Britain’s EU Commissioner. Surely this won’t happen a third time? This is a great bet for William Hill and a bad one for punters. You have no idea when you will get paid – it could go on for years – and meantime you are locking up your money with the bookmaker.