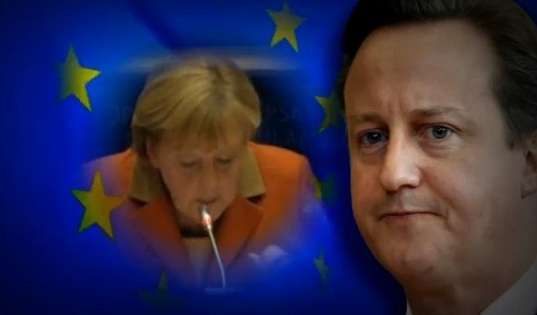 And if so, where does that leave Cameronâ€™s big speech?

For something that neither starts nor ends, an economic crisis can be a pretty potent thing. Or to refine that assertion, itâ€™s obvious when the crisis is in full swing but itâ€™s impossible to say when itâ€™s started or when itâ€™s ended; they just emerge or build, and decline or fade. This time last year, there was huge doubt over whether Greece would default, whether Italy or Spain would need bailing out and whether the Euro itself would collapse. Itâ€™s some time since those questions have been aired, so is it all over?

On one level, yes, the crisis is far less intense than it was. As things stand, governments can largely borrow on the open market (even Greek 10 year bonds now trade at interest rates of 11%, having peaked at over 37% in March), and the risk of default seems remote. That, however is only part of the story.

The Euro-crisis is really three interrelated crises all rolled together. The first is that described above, of Sovereign Debt; obtaining it at an affordable rate and being able to pay it back. That particular aspect came about as the bubble economies that had been built on unjustifiably cheap debt became unstable. As with all economic bubbles, the only routes out are a managed deflation or an unmanaged bursting; neither is nice and both lead to the second aspect: the Real Economy.

At best, deflating a bubble means years of minimal growth in GDP, low investment returns for savers, and falling real wages or high levels of unemployment. At worst, it can induce a sustained depression for years. Even if the Sovereign Debt crisis is over, that hangover will last some long time yet. The risk is that if it gets too bad in any one country, it again undermines confidence in its ability and takes us back to square one.

It also feeds the third aspect: the Political crisis. Itâ€™s no coincidence that since the European Depression began, thereâ€™s been a rise in support for parties outside the mainstream in many countries and an even bigger decline in support for the traditional parties of government as blame is assigned for perceived incompetence and economic distress. However, the interrelatedness of the three â€“ sovereign debt, economic and political â€“ again comes into play as uncertain politics makes investors (both financial and industrial) nervous.

Put simply, the Sovereign Debt crisis is only over if the Economic and Political ones can be contained, and they are very much still with us.

Which brings us to Cameronâ€™s big speech on Europe, as yet unmade, though partially released. There are two simple facts here: the UK cannot force reform to happen if other countries are happy with the status quo, but that significant changes to the EUâ€™s structures cannot happen without the UKâ€™s agreement. There is therefore only really leverage for the UK to push a decentralisation agenda if other member states are intent on treaty revision anyway â€“ and thatâ€™s likeliest if there is some pressing impetus.

For the time being, that doesnâ€™t particularly matter. EU reform of the Cameron is after is not part of the Coalition Agreement and itâ€™s highly questionable as to whether he could gain agreement of the Lib Dems to negotiate it even if, as suggested from the released extracts, the line seems to be more a general repatriation of powers than UK opt-outs. On the other hand, thereâ€™s little doubt that Cameron is under pretty intense pressure both from within his party and without to adopt a Eurosceptic stance; something which, if nothing else, the speech is designed to address.

As for whether he can turn his words â€“ assuming they are eventually delivered â€“ into deeds, he first has the not insignificant task of winning an election outright. If he can, the question of whether he can deliver will depend in no small part on the extent to which the Euro-crisis is still ongoing. Other member states wonâ€™t grant Britain unilateral concessions but if there are quid pro quos to be made, deals are possible. If not, for all the hype, the speech is little more than positioning â€“ though we shouldnâ€™t underestimate how important positioning can be, both for the prospects of individuals and of parties.