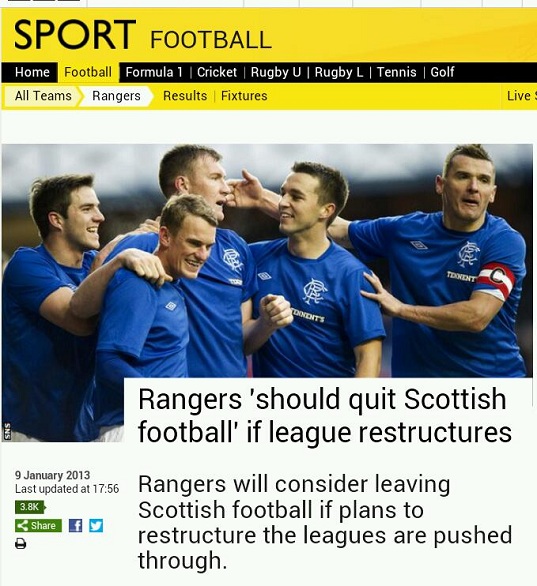 What would pulling out do to the independence debate?

Identity is one of the most potent forces in politics; the sense of who we are individually and collectively. Thatâ€™s why the unusually strongly-worded statement from Rangersâ€™ chief executive this week in response to the football authoritiesâ€™ proposal there potentially brings two of the stronger identities into conflict: those of nationality and football club support.

The threat from Rangers to leave if a restructure leaves them in the bottom division, even if they win their championship this season, undoubtedly has more behind it than a protest against a perceived injustice. The riches of the English Premier League is an obvious draw, and the threat may be a bluff aimed at scuppering disadvantageous plans.

Even if theyâ€™re serious, there would be formidable logistical barriers to switching leagues (and, by implication, Associations). UEFA and FIFA view teams playing out of their Associationâ€™s area unfavourably and for Rangers to do so would currently require the sanction of the SFA, which is even less likely to be granted. On the other hand, the example of Swansea and Cardiff playing in the English competitions exists and questions of restraint of trade could be raised if Rangers transfer is refused, particularly given the already anomalous position of the Home Nationsâ€™ independent status in international football.

So whatâ€™s the link with the independence debate?

Firstly, thereâ€™s the implication that Scotlandâ€™s football canâ€™t compete at the top level,and that the clubs would be better off together in the more lucrative league operating across the rest of Britain â€“ an obvious echo of the unionist arguments.

Secondly, thereâ€™s the fact that even if Rangers can jump Hadrianâ€™s Wall and join the league pyramid south of the border in the near future, it wouldnâ€™t be sustainable were Scotland to become an independent country.

Thirdly, and in opposition, the sort of increasing integration Rangers move would exemplify would threaten Scotlandâ€™s position as an independent football force as long as it is part of the UK (as well as, by extension, those of the other Home Nations).

So how big an impact would it have should they were to pull it off? We shouldnâ€™t underestimate how strongly a part of their identity some feel their football club allegiance to be. Nor how broad â€“ every other weekend throughout the season, roughly 1% of Scotlandâ€™s entire population travels to Ibrox to watch the team in blue and many more would if they could â€“ but neither should it be overstated.

Apart from the possible consequences providing arguments for both sides, the independence debate will surely turn on more obvious political subjects of economic prospects, self-control and other aspects of identity. But if Rangers are serious â€“ and itâ€™s not yet obvious if they are â€“ then expect to hear a lot more about what their decision means, from both sides.