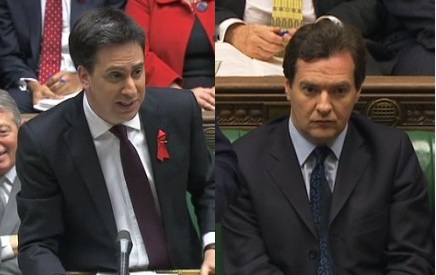 Is that what the election could come down to?

Some elections are won; most are lost. Rarely do the electorate have the luxury of two parties, both of which look like they could offer a strong, competent team which could govern well and lead the country forward in the way it would like. Sometimes they donâ€™t have any and itâ€™s a matter of choosing the least-worst option or opting out altogether.

Itâ€™s not inconceivable that 2015 may be a case in point. As Mike has commented on in several threads over the last few months, the combined leadership ratings of all three main leaders are at historically dreadful levels. The governmentâ€™s approval rating in YouGovâ€™s daily polls averages in the high minus thirties yet David Cameron remains the publicâ€™s preferred prime minister against Ed Miliband by some margin.

The point at which there was a step-change in the polling is not difficult to identify: after the budget, Labourâ€™s lead jumped by five or six points and the governmentâ€™s general rating slumped by around fifteen points and its economic management rating by twenty points.

The cause was almost certainly George Osborneâ€™s enthusiastic jumping into the elephant trap Gordon Brown and Alistair Darling laid for him, when he increased the top rate of Income Tax.

Other PR difficulties didnâ€™t help at the time but the decision to reduce the top rate by 5% had two deep and damaging effects for the government: it undermined the argument that weâ€™re all in it together and itâ€™s difficult to reconcile with the case for austerity, which makes the spending cuts seem ideological rather than a practical necessity.

The unforced political error of the income tax cut has been compounded by a failure to continually remind the public of the reason for the austerity programme: the structural deficit the Labour government built up, the boom they allowed and encouraged and the failed regulation they introduced. Although about 5% more still blame Labour than the Coalition for the cuts, thatâ€™s down from a 15% gap at the start of the year.

And yet for all the governmentâ€™s problems and Labourâ€™s consistent poll leads, both Milibandâ€™s personal figures and Labourâ€™s image ratings suggest an underlying weakness of their position.

Labour is doing well because it is not the government. The question is whether it will continue to do well when voters have to weigh their leaders as an alternative government.

The government â€“ or Cameron specifically â€“ does have one other card to play which is unavailable to Labour. Even if Labour had a tradition of replacing underperforming leaders, which it doesnâ€™t, and even if the partyâ€™s mechanism made it relatively easy to do so, which it also doesnâ€™t, it would be extremely difficult to justify a change when Labourâ€™s ten points or more ahead in the polls. By contrast, itâ€™s far easier to reshuffle a Chancellor.