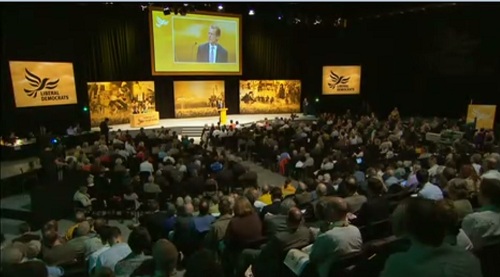 It’s possible that they could finish in 5th place

Talking with delegates here at the Lib Dem conference I get little sense of any appetite for a change at the top just now.

The big hope is the same as the Tories – that come the May 2015 general election there will be the glimmer of an economic recovery and all the pain will have been worthwhile.

Maybe – maybe not. But before then they have an electoral challenge that could be a mighty disaster – the elections for the European Parliament in June 2014.

Last time, a year before the general election, they finished in fourth place behind the Tories, UKIP, and Labour in that order.

What if in 20 months time they slip into fifth place behind the Greens?

Given the nature of these elections where there’s little opportunity to run candidate-focused campaigns, this must be a distinct possibility.

June 2014 is the moment that is being identified as the event that could trigger the moves that could bring change.

By then there will just be eleven months to go before the general election and such an outcome would be an appalling spring-board.