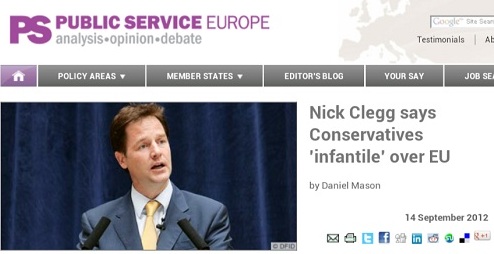 We are just one week away from the opening of the party conferences when the main objective of the leaders is to ensure that at the very minimum they get through unscathed with their positions not being undermined.

This is the period in the year when it’s all about connecting with your base and the more you can be nasty about the other parties then the better.

This is especially so for the coalition partners who’ll be keen to encourage differentiation for the second half of this parliament.

So the news of Clegg’s attack on the Tories will not come as a surprise. There’ll be piles of manure being chucked the other way ahead of and during the Tory gathering in Birmingham at the start of October.

Clegg told a dinner that: “We are in a coalition with a party that has totally different instincts to us on this..The modern Conservative party isn’t just Eurosceptic, I think it’s becoming increasing Europhobic and isolationist”. The behaviour of some Conservatives was “infantile”.

He added that the eurozone was “massively important” to the UK despite the “increasingly negative” view most people had about it. “It is in our massive interest that they do sort things out and to be supportive”

Whether this will help Clegg connect with his party’s activist base is another matter.