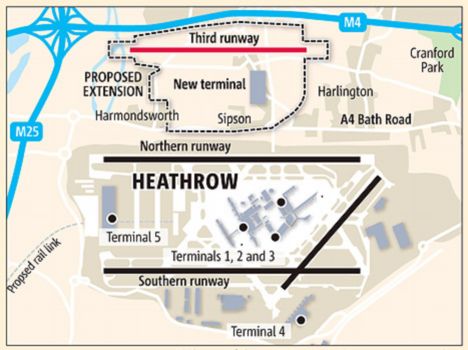 Henry G Manson looks at the consequences of a U-turn

David Cameron has given every sign of preparing for an eventual u-turn over Heathrow. The Prime Minister is now seeking a cross-party consensus over a third runway although it’s been made clear the policy won’t change during this parliament, but could well apply if the Conservatives were returned in 2015. To remove further barriers to this policy shift David Cameron has reshuffled Transport Secretary whose constituents would be directly affected.

Boris Johnson has since raised the stakes calling this new stance a ‘fudgerama’ and vowing to fight it all the way. In doing so the Mayor of London may have identified a perfect route into parliament before the next election.

Now some have wondered how he could possibly explain seeking a return to Westminster in 2013 or 2014 having not completed a full second term as Mayor. Everyone knows the decision on Heathrow clearly exceeds the Mayor’s powers and so Boris could explain to Londoners that to have the best chance of winning his campaign against a 3rd runway he needs a voice within parliament. There is no constitutional reason why he could not be a mayor and MP at the same time – just as Ken Livingstone did for a while.

What would be the best way for Boris to underline the point that his early return to Westminster is based on some form of principle? Step forward Zac Goldsmith who has said he is prepared to cause a by-election as a Conservative MP over the abandonment of the Healthrow runway pledge. It would create a neat symmetry and would be the ultimate retribution from the current MP for Richmond.

Had Cameron made a swift and sudden u-turn on Heathrow it would have been far harder for Boris Johnson seeking to become an MP just 4 months after being re-elected. But in making his intentions clear yet drawing out the official decision for several years David Cameron increases his vulnerability. Zac and Boris could chose to strike at any time of their choosing.

In David Cameron’s defence he hasn’t the freedom to make a sudden u-turn given the fact he’s in a coalition government with Liberal Democrats. But there will be those that say the Conservative leader only has himself to blame having failed to meet expectations and win a majority in despite many, many factors apparently in his favour.

Whether the airport ever gets its third runway built, Heathrow can now provide the political landing lights for Boris Johnson to become an MP again. And who knows what else.