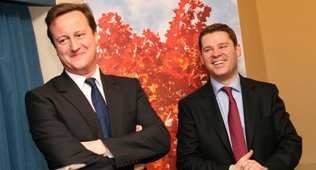 Thank God the athletes have arrived! Now we can move on from leftie multi-cultural crap. Bring back red arrows, Shakespeare and the Stones!

The most leftie opening ceremony I have ever seen – more than Beijing, the capital of a communist state! Welfare tribute next?

Seems my tweet has been misunderstood. I was talking about the way it was handled in the show, not multiculturalism itself

Can the blues win elections following his robustness?

One thing’s for sure – the name of Aidan Burley, the Oxford educated New Zealand-born MP for Cannock Chase will NOT be appearing on the list of newly promoted ministers in Cameron’s planed re-shuffle.

He was widely condemned for the Tweets on Friday night especially as this followed his widely reported attendance at a Nazi-themed stage do last year.

But could his robust views on multiculturalism resonate with voters – particularly in the key marginals that the Tories need to pick up to win a majority?

Or will they alienate the centre ground voters that David Cameron, certainly in the early part of his leadership, was trying to attract?

My view is that the latter statement is more correct. We have moved on as a society.