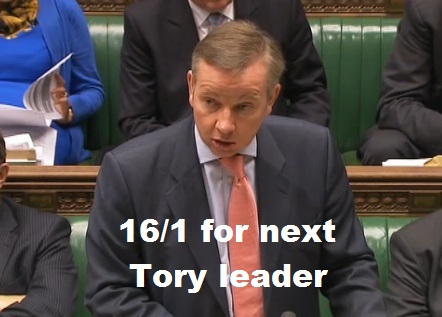 Should you be taking the Ladbrokes 16/1?

Anybody who watched BB1’s “The Week” last night will have heard Michael Portillo talk in strong terms about Michael Gove’s chances of becoming next Tory leader.

Portillo described the education secretary as a “serious candidate for the future“. His great strength was that “He knows what he is about, he knows what he wants and these are things that people crave.”

Certainly compared with others at the top of the betting Gove must be in with a shout – whenever Dave decides to spend more time with his boxed sets.

One thing’s for sure – Portillo’s comments don’t seem to have moved the markets. Ladbrokes have him at the best price – 16/1. William Hill make him an 8/1 shot with PaddyPower quoting 7/1.

Only problem with this sort of betting is that your stake could be locked up for years even a decade.

The other factor, as Michael Portillo would no doubt confirm, is the the blues have a long history of NOT choosing the favourite – though Gove is some way from that slot yet.

No doubt the EdSec’s appeal with his party will be enhanced by the argument going on with Lib Dems over his statement on exams yesterday.