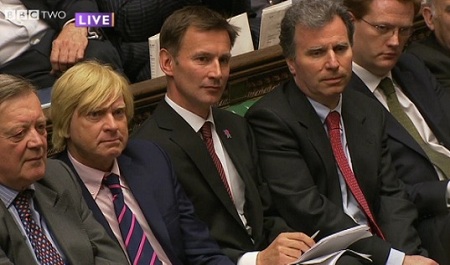 That this House believes that the Secretary of State for Culture Olympics, Media and Sport should be referred to the Independent Adviser on Ministersâ€™ Interests to investigate whether he breached paragraph 1.2c (giving accurate and truthful information to Parliament) and paragraph 3.3 (responsibility for his special adviser) of the Ministerial Code.

Surely they should be voting in favour?

So the stage is set for tomorrow’s commons vote on whether Cameron was right not to refer Jeremy Hunt to the Independent Adviser on Ministersâ€™ Interests.

Labour has been very smart with its drafting and has put the focus totally on two areas where it believes there is a strong case. This has made it easier for the Lib Dems to abstain.

I’m not convinced that this is right. If the yellows couldn’t back the motion they should vote against.

I just wonder whether John Bercow, the speaker, will play a key part tomorrow – after all the charge that Hunt misled MPs is very much a House of Commons matter and he might have something up his sleeve.