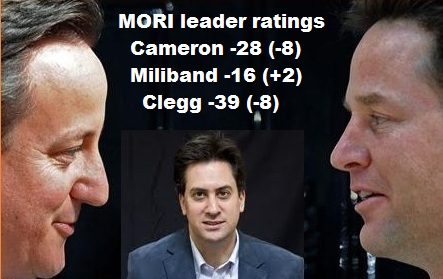 Both the PM and Nick Clegg see 8 points drops

Clegg also sees a big drop in his MORI ratings down from -31 in April to -39 now.bit.ly/JXzzkh

Cameron’s -28% MORI rating is worse than Gordon Brown’s was in any survey from the pollster in the 5 months before the 2010 election.

The latest Ipsos-MORI telephone poll for the Evening Standard is out and has more bad polling news for the coalition parties and their leaders.

Dave’s -28% rating is worse than anything that Brown scored with MORI in the period up to the 2010 general election. These were:-

The only consolation for them is that EdM’s personal numbers have only moved a little even though Labour voting intention share has risen by 5%.