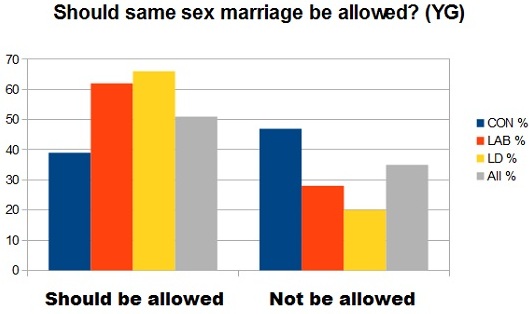 Should the party ignore the activist base?

The subject of gay marriage has come to the fore in both the US and in the UK, In the former last week electors in North Carolina voted to amend the state constitution to ban it. A day later Barack Obama said that he was in favour.

Here in the UK it’s been a issue particularly within the Tory party and this morning Philip Hammond was on the Marr show expressing his reservations.

But have the blues got this right?

Is it wise to oppose something that, according to today’s YouGov poll, is backed by 51% of voters with 35% against?

The chart above shows Tory voters opposed by 47% to 35%. Supporters of their coalition partners, the LDs take a very different view with 66% supporting and just 20% opposing. Labour are split 62% support to 28% oppose.

What we don’t know is whether this is an issue that impacts on voting. The anti-gay stance of the blues in 2000 led to one prominent Tory MP, Shaun Woodward, defecting to Labour thus creating a vacancy in the solid Tory seat of Witney. He was replaced by one David Cameron.