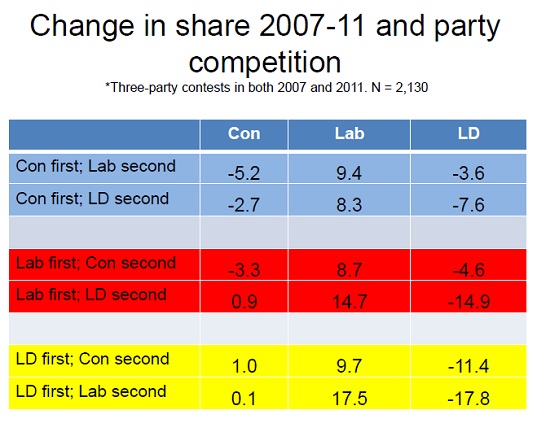 Or will the 2011 dynamics be repeated?

Last year’s local elections, the first to be held since the formation of the coalition, transformed the political landscape.

The table above, prepared by Professor Colin Rallings for last month’s Political Studies Association briefing, sets out what happened in six different categories of council seats.

The big picture from twelve months ago was that the Tories lost out to LAB but were able to make that up with gains from the Lib Dems who really suffered.

Just look at the fifth line of the table – councils seats that had been held by the yellows where the blues were the challenger. The LD share drops by 11.4 points with the vast bulk of that going to Labour. But the beneficiary of this switch was not Miliband’s party but the Tories.

In May 2011 Cameron’s party was able to win hundreds of LD seats because of Labour’s success.

Is that going to be repeated again tomorrow or could the mood have moved to stopping the Tories rather than “punishing” the LDs?

If it hasn’t then Clegg’s party’s local government base will drop below 3,000 councilors to the lowest level since it was created with the SDP merger in 1987.

Each year ahead of the May locals Professor Rallings, together with his colleague Professor Michael Thrasher, produce a projection, based on local council by-election results, of what they think the national equivalent vote share will be. When the seats were last fought in 2008 this was CON 43/LAB 24/LD 23.

For tomorrow the R&T projection is for CON 34% (-9): LAB 37% (+13): LD 18% (-5). Labour, undoubtedly, are going to make a lot of gains but how will the CON-LD battle shape up? What will the results say about Clegg’s strategy of policy differentiation from his coalition partner?

An interesting night ahead.