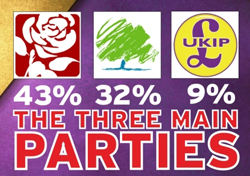 Pollster says Clegg’s party could be down to 7 seats

The above graphic was put out by UKIP overnight after the latest YouGov daily poll showed them, for the first time, in third place,

This was a smart move by the purples and will heighten expectations for serious council seat gains for UKIP in the local elections a fortnight on Thursday.

The 43/32/8/8 poll followed another survey earlier in the day amongst members of the YouGOV polling panel who reside in current Lib Dem held seats or targets which has grim news for the yellows. Taking into account the VI changes it found and the proposed new boundaries it pointed to Clegg’s party being reduced to just seven MPs at the next election.

These figures changed in a second voting intention question with a constituency prompt to CON 28%, LAB 31%, LD 24% and it was on those shares that the seat projection was made.

So even with the LD-friendly question format the party was down 17 points on the general election.

This all sets up the local elections nicely and a key measure, as used by the Conservative’s local election analyst, Rob Hayward, in 2011, will be how well the Lib Dems do on May 3rd in council seats in the constituencies where it has MPs. All of these, I assume, were included in the YouGov polling.

If there’s a collapse in those wards on the scale found by YouGov then that could have serious consequences.