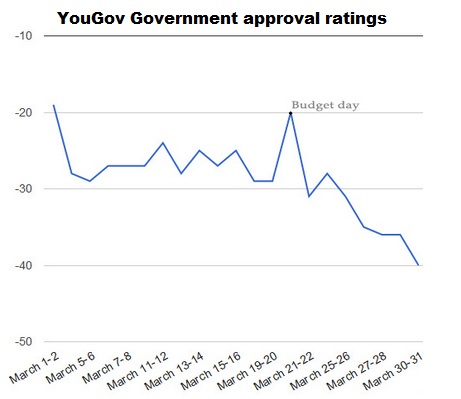 But they’re still nowhere near the Brown government at its worst.

Lord Stewart Wood, one of Ed Miliband’s closest aides, is circulating the above government approval ratings and it’s hard to quibble that things are, to put it mildly, less than optimal for Cameron/Osborne.

The latest from YouGov shows a negative of minus 43% – which is the worst they’ve been since the general election.

In the chart above we see what happened in March. The budget and associated issues like the granny tax and hot pasties didn’t help but I think the numbers also reflect on the less than sure-footed handling of the fuel dispute and the cash for access allegations.

All the numbers from the May 2010 general election can be seen here.

Although the figures look bad the situation is nowhere as dire as it was for Brown’s Labour government in May 2009.

Then just 15% approved of the government’s record to date with 72% disapproving – a net negative is minus 57%.

There can be little doubt that the events of the past three weeks have been the darkest period for the coalition and Cameron/Osborne in particular but there is three years to go to the election.

UPDATE: Sunny Hindal of Liberal Conspiracy has tweeted that it was him who devised the initial version of the chart not Lord Stewart Wood. I’m very happy to acknowledge that.