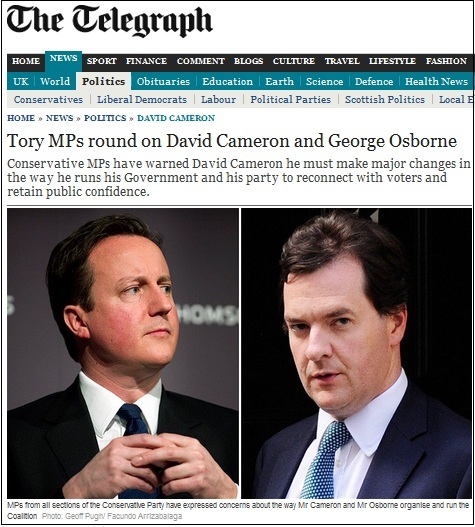 How vulnerable are Dave and George?

The front page of tomorrow’s Telegraph is dominated by James Kirkup’s story above about the mode of Tory MPs following three difficult weeks.

He writes: … speaking both publicly and privately, MPs have identified four areas where they say Mr Cameron should make changes:

â€¢The Downing Street machine should be overhauled amid widespread concern that Government policies are being poorly explained to voters, especially those in key marginal seats.
â€¢ Mr Osborne is under mounting pressure to end his dual role as both Chancellor and head of Conservative political strategy.
â€¢ A senior MP should be appointed as full-time Conservative Party chairman, ending the current arrangement where job is shared by two peers.
â€¢ This yearâ€™s ministerial reshuffle should be used to promote more MPs from working-class and northern backgrounds, to counter the perception of a Government dominated by privileged public schoolboys

Given the polling and the collapse in Cameron’s personal rating it’s no wonder that there’s a sense of nervousness.

Cameron, as we’ve seen before, is at his best when he’s under pressure and my guess is thar he’ll ride this out – for now. The Osborne position is different. He’s never been loved but has always been seen as brilliant strategist. That has all started to change.