UPDATED to deal with error 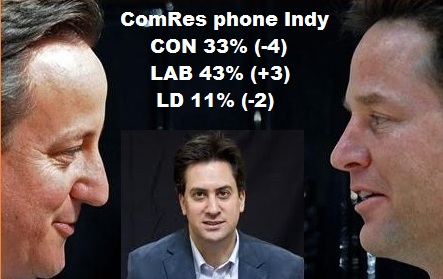 But Populus is showing a different picture

There’s a new ComRes telephone poll just out for tomorrow’s Independent which has Labour in its best position since before the 2005 general election.

The shares, seen in the graphic above, show a widening of the Labour lead from three to ten points.

In the interviews conducted on Saturday, before the cash-for-access revelations emerged, Labour enjoyed a lead of just 4%. It was 39/35/11.

The sensational part is that in those interviews that took place on Sunday and today after the cash for access disclosures, it was LAB 47%: CON 30%: LD 11% – a LAB lead of 17 points.

There were more in the latter batch than the former.

To other questions 66% agreed with the statement that the measures announced in the Budget show that the Conservatives are the party of the rich, with 27% disagreeing.

George Osborneâ€™s decision to freeze personal tax allowances for pensioners is opposed by a margin of almost 2-1.

LAB moves to 4% lead with Populus 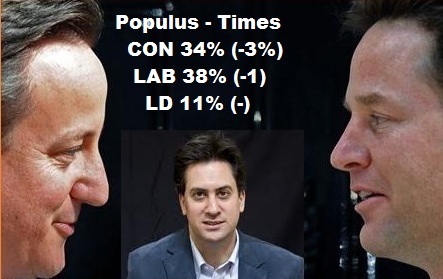 A big difference difference between the two surveys might be in the fieldwork dates. A part of the ComRes polling took place today as the “cash for access” story dominated the front pages and the bulletins. My guess is that the majority of the Populus fieldwork had been completed before the story broke.