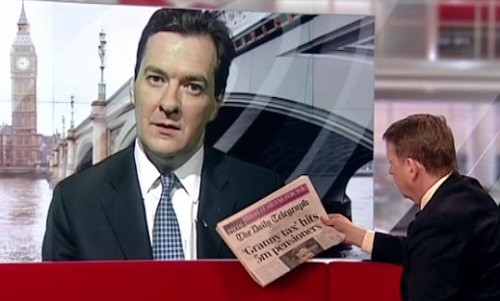 Was this a reason for the grannytax cock-up?

The ConHome editor, Tim Montgomerie, paints an extraordinary picture of the many roles that George Osborne has in this government in a opinion piece in today’s Times. He writes:-

“11 Downing Street is now the headquarters of government in a way that Gordon Brown could only dream of when he was Chancellor of the Exchequer. Where Mr Brown sought more power by relentlessly undermining Tony Blair, Mr Osborne has accumulated power by relentlessly serving David Cameron. Mr Cameron is the coalitionâ€™s chairman and public spokesman. Mr Osborne is its chief executive. This is as much Osborneâ€™s Government as Cameronâ€™s.

He isnâ€™t just Chancellor of the Exchequer, masterminding the coalitionâ€™s deficit and growth strategy. He attends all the daily roundtables at No 10. One source tells me that heads rise and look to him, not Mr Cameron, when anyone makes a controversial statement at those meetings….

…he is also the Conservativesâ€™ chief election strategist. He watches and grooms the new generation of Tory MPs, assessing which will be promoted and which will have to wait. And he is the partyâ€™s principal spin doctor â€” keeping editors and senior columnists in the inside loop more than any of the people who are paid to do that job..”

Is it any wonder then that amidst all of that then George failed to notice the potential of the granny tax issue particularly as he was also lowering the top tax rate? Handled sensitively this would have been killed stone dead on Wednesday. As it was what was supposed to be a politically astute budget has developed into a PR mess.

Montgomerie’s solution is to replace Baroness Warsi as party chairman with Michael Gove. I’m not sure about that. If Warsi is to be redeployed then there are others more suitable.

Whatever the budget aftermath has exposed a big weakness. Too much is being piled on George – he has to let go of something.