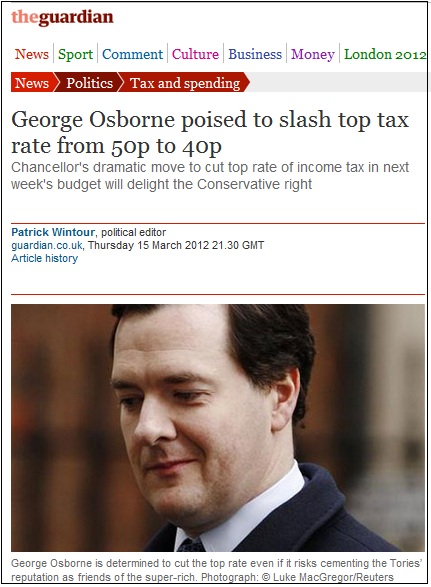 According to the lead story in the Guardian this morning the chancellor, George Osborne will announce the axing of the 50p tax rate in his budget next week “in a dramatic move that will delight business and the Tory right”.

The report goes on”…the Liberal Democrats appear to recognise that they are not going to be able to block what is Osborne’s key demand for the budget, but are trying to maximise the concessions they can extract in return.

Government sources say that from the outset the chancellor has seen a cut in the 50p rate as the headline-grabbing measure of the budget, and views it as the simplest single step he can take to show his commitment to an enterprise economy.”

If the Guardian report is right then it suggests that Osborne is taking a huge gamble which could define his chancellorship. For while there is probably an economic case for the move there’s a huge political risk. He and his party will stand accused of favouring the top 1% at time when many in the remaining 99% are under massive pressure.

The argument that this could increase the overall tax take is a hard one to get over and provides an easy target for Labour.

Quite where this fits with his long-term mission alongside Cameron to “decontaminate” the Tory brand is hard to say. Polling late last years showed that far more voters were saying that would never vote Conservative compared with other parties. The blues still have a long way to go.

The next week on PB We are off on holiday to North Northumberland and I will be posting a lot less. There will be more guest slots and continuation threads.