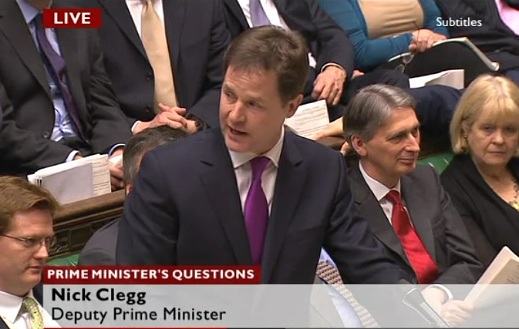 Is the DPM making this the price for boundary changes?

One aspect of yesterday’s PMQs, taken by Nick Clegg because Cameron is in the US, which has received very little attention was his throwaway comment in a reply to ex-minister, Peter Lilley, on the boundary changes.

Lilley asked why Clegg was putting so much focus on reforming the house of Lords when there were so many more important issues to deal with. The DPM’s response was very telling:-

“..There are other issues like changing the boundaries which I know are close to his party’s heart..”

I think that that is the first time that Clegg has gone public linking progress on the reform of the upper house to the proposed new boundaries. You can see the exchange here.

Until now the only LD figure to have made such a public threat was Lord Oakeshot in an interview on the Daily Politics.

My reading is that Clegg’s comment is a significant escalation. It shows a readiness to ensure that the 57 Lib Dem MPs will abstain or even oppose the detailed boundary plan when it comes before the house in the second half of next year.

The principle of reducing the numbers of MPs from 650 to 600, creating equal-sized constituencies, and a fast track approach to boundary reviews was part of the coalition agreement. It’s the detailed implementation of the new boundaries themselves that has to be agreed by a vote of MPs.

The big impact of the revised electoral map is to lower the threshold for a Tory majority. Currently that equates to a lead over LAB on votes of about 11%. The changes brings that down to about 7%.

You can get 7/4 with PaddyPower that the size of the house of commons will remain at 650. It might be a good bet.