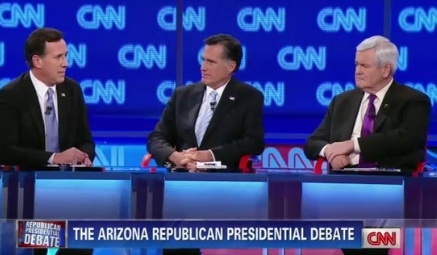 Is he denying Santorum frontrunner status?

For all the time, money and energy spent in the race for the Republican presidential nomination, not all that much has been decided in the first two months. The states that have voted so far account for only about three hundred delegates, and the final allocation of some of them isnâ€™t settled. March is an entirely different prospect.

After Washington today (43 delegates), Super Tuesday sees states worth well over 400 delegates go to the polls. Following swiftly on, next Saturday accounts for around another hundred, the Tuesday after that over a hundred more, and then there are close to two hundred more delegates up for grabs in the second half of the month. All in all, around three times as many as January and February combined.

The way things have panned out, thereâ€™s only really space for three candidates: Ron Paul, who will continue to pick up his loyal 10-15% and no more, Mitt Romney, the establishment choice and front runner, and a conservative alternative to them. That final slot remains contested between Rick Santorum and Newt Gingrich, with Santorum increasingly taking the edge. In fact, Gingrich now looks set for a string of further thirds and fourths on Super Tuesday, his home state of Georgia apart.

That begs the questions of why heâ€™s bothering to continue to run and why people will bother to fund him. The most obvious answers are that heâ€™s either waiting for one of the leading candidates to slip up very badly, or for the convention in the hope that he and Ron Paul can gain enough delegates to stop anyone winning outright. That might make sense for him personally but is a less attractive argument for his backers: what do they get out of it that they couldnâ€™t get elsewhere?

With Romney heading back towards a comfortable lead in the latest national polls, is Gingrichâ€™s stubborn unwillingness to quit costing Santorum votes, delegates and perhaps the nomination?

The first thing to say to that is that the polling is more nuanced. While the national picture has Rasmussen and Gallup reporting double-digit Romney leads, the polling from the Super Tuesday states is much more favourable for the former Pennsylvania Senator, where he leads in Tennessee and Ohio, for example.

One thing thatâ€™s very noticeable from the polling history is how both Santorum surges coincided with collapses in the Gingrich vote. That does not necessarily imply that the rest would transfer so readily. Newtâ€™s base of 15% has been solid since November. By contrast, the bursting of both of his polling bubbles may well have been further migrations of the perpetually disillusioned or refugees from candidates whoâ€™d withdrawn: different types of voter. Even so, all things being equal, Newtâ€™s base ought to be more sympathetic to Santorum than Romney.

If so, that may well make the difference between one or other candidate being the front-runner. After all, while Romney currently has about as many delegates as everyone else combined, thatâ€™s heavily down to his two winner-take-all wins in Florida and Arizona. The rest have split very evenly overall.

Romney is likely to gain another effective winner-take-all victory in Virginia – where Ron Paul is the only other candidate on the ballot – but most of the rest of Marchâ€™s states allocate proportionately. The crunch begins to come not long after this current flood of primaries, as winner-take-all states become more frequent. This of course assumes that Santorum is still in the game at that point which considering the week heâ€™s just had isnâ€™t a given. And that, together with his likely win in Georgia, is why Newtâ€™s likely to keep battling on for a good few weeks yet.